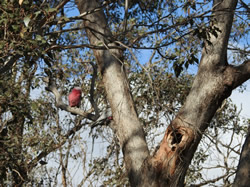 Although bird sightings were down due to the dark, cloudy conditions we still saw a variety of birds. A pair of White-bellied Sea-eagles took off from a spit of land in the treatment plant, on our arrival. They circled over the water for a while until a Wedge-tailed Eagle suddenly appeared, causing them to depart.

Several Galahs were noted to have extra bright plumage (reminiscent of breeding colouration) & a pair of Galahs in Bush’s Paddock appeared to be checking or renovating a nest hollow. Perhaps the unseasonal Indian Summer is triggering nesting behaviour?

Geraldine writes:
‘A great day had by the 12 people that attended this survey. It was windy at times and threatened to rain on us but we got through unscathed. Bird species and numbers were down in all areas but there were large numbers of Red rump parrots and Brown Treecreepers in Eynesbury Forest. The high light would have to be the 2 Sea-eagles at the sewage works.’