A series of photos were taken by a trail camera at the two water troughs placed in Pinkerton Forest (beside the Green Shed & in Upper Pinkerton) as well as beside the Pinkerton Link / Mulla Mulla gate giving us an insight as to what happens in Pinkerton in our absence! We have also had a glimpse into night time activities in Pinkerton. The water troughs appear to be a focus of activity, both day and night. The trough beside the Green Shed especially is a focus of activity for a variety of local wildlife (native and non-native). A dramatic incident recorded a Fox in pursuit of a Possum beside the water trough. Fortunately both the possum and its young were photographed the following night so they both survived the chase! 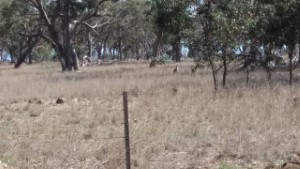 We were surprised to find that the water trough is used so extensively by native wildlife. The water has been provided in the forest as livestock are brought in to graze from time to time for environmental purposes. Sheep are introduced to control exotic annual weed grasses in spring, grazing them befre they set seed. This also prevents the proliferation of spring-flowering exotic annuals from becoming a fire hazard later in summer. The water trough provided for livestock also provides water for thirsty native wildlife. An example of pastoral activities complementing protecting the native environment.

Seed-eating birds such as Parrots Galahs & Cockatoos need to drink regularly whereas mammals seem to visit the water trough mainly in hot weather but less frequently when the weather is cooler or wet. The Koala was only seen to drink once. However it took 18 minutes to drink, during which time it was joined by a Brush-tailed Possum which spent about a minutes drinking. For a brief moment the shared a drink together, almost shoulder to shoulder! 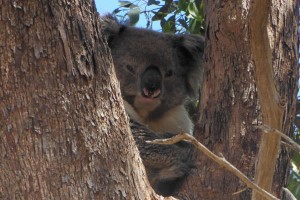 Bathing seems to be a popular activity with the birds in hot weather. Even the Boobook Owl seems to enjoy a bath. It seemed to be a regular visitor on hot nights, bathing about midnight. Have Boobook Owls been recorded bathing before?

The Koala was observed drinking from a water trough in Pinkerton Forest at midnight. Photo dates record that the Koala spent 18 minutes drinking! Beginning at 12.00 and finishing at 1218! A long Drink indeed!! While it was drinking a Brush-tailed Possum joined it for a drink then left, leaving the thirsty Koala still drinking. For a brief moment they shared a drink, shoulder to shoulder almost! Both the Possum (the Possum is usually accompanied by a juvenile) and the Koala seem to be regular visitors to the water trough.

Koalas are widely acknowledged as not drinking. The very name Koala is said to mean ‘no drink’. Perhaps this is evidence that drought is taking its toll. Some evidence suggests that it times of drought the eucalpts become heat stressed, resulting in less moisture being available in gum leaves for the Koalas. www.smh.com.au/national/nsw/researchers-investigate-koalas-need-for-drinking-water-as-climate-change-bites-20170302-gup55b.html

Other information suggests that Koalas may drink from rain that runs along smooth-barked eucalypts. Grey Box trees lack such smooth bark and rain has been sporadic this spring. https://koalaclancy.wordpress.com/2018/05/02/do-koalas-drink/;

Or perhaps Koalas simply drink more than we think we do?

A series of photos recorded a ghostly light moving around in the darkness one night. An apparition of the mythical Min Min light perhaps? Or more prosaically a spotlight? Or perhaps even a large moth illuminated by the flash? Enhancement of the photo was not helpful. Whatever the light source, the possums seemed unperturbed.

Noticeably absence from these photos are Corellas! Both Long-billed and Little Corellas frequent Pinkerton Forest. Their absence from the water trough indicates that perhaps they may prefer to drink elsewhere. There are similar water troughs throughout the grazing areas. The nearby dam would also provide suitable water, as would the treatment lagoon about a kilometer away. 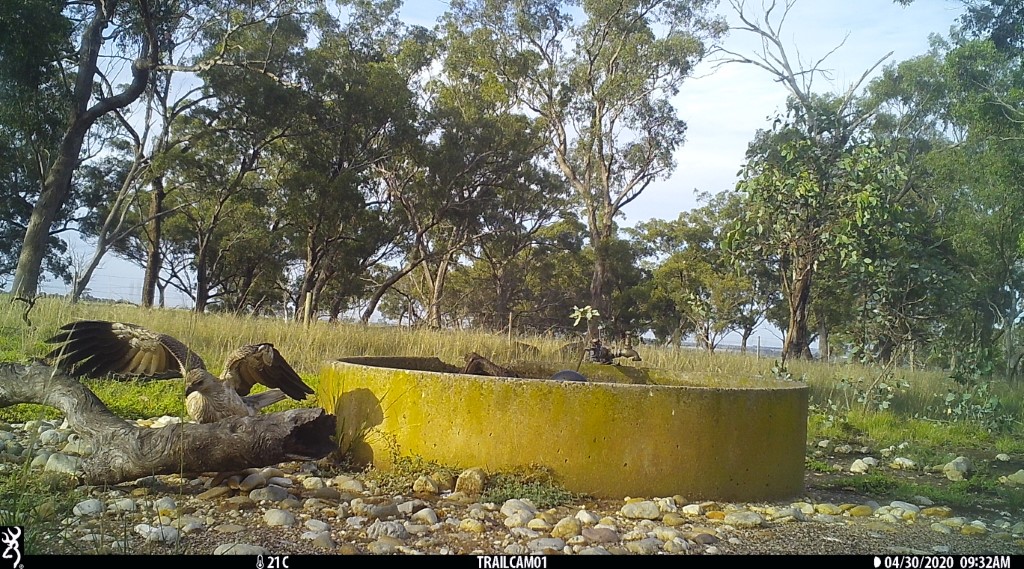 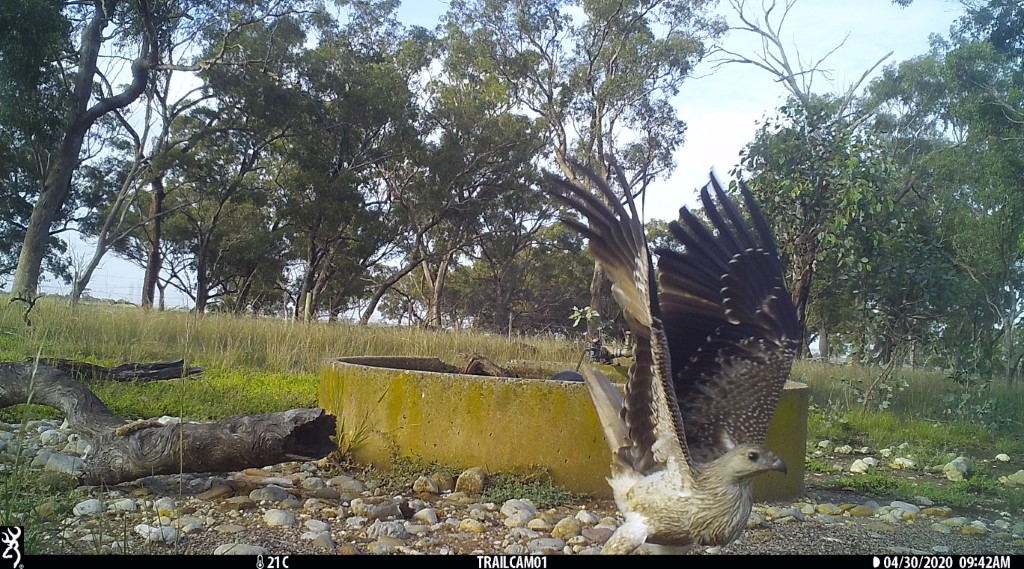 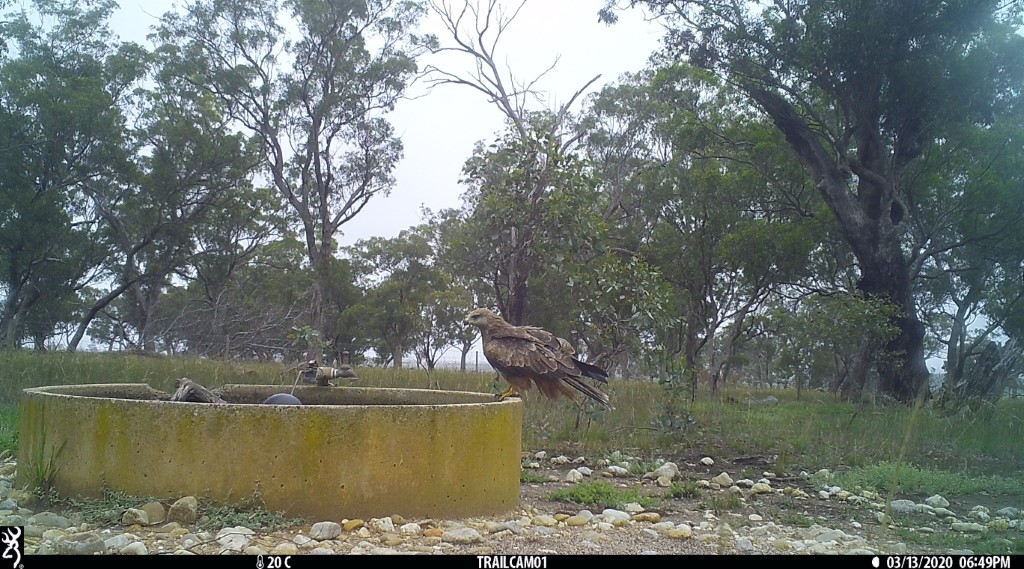 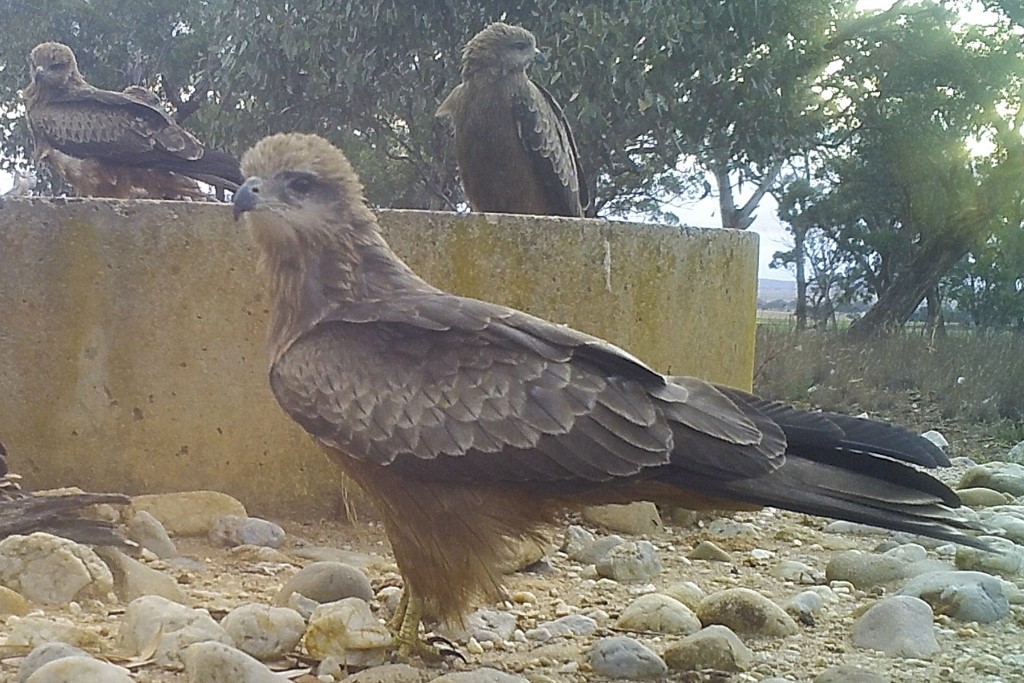 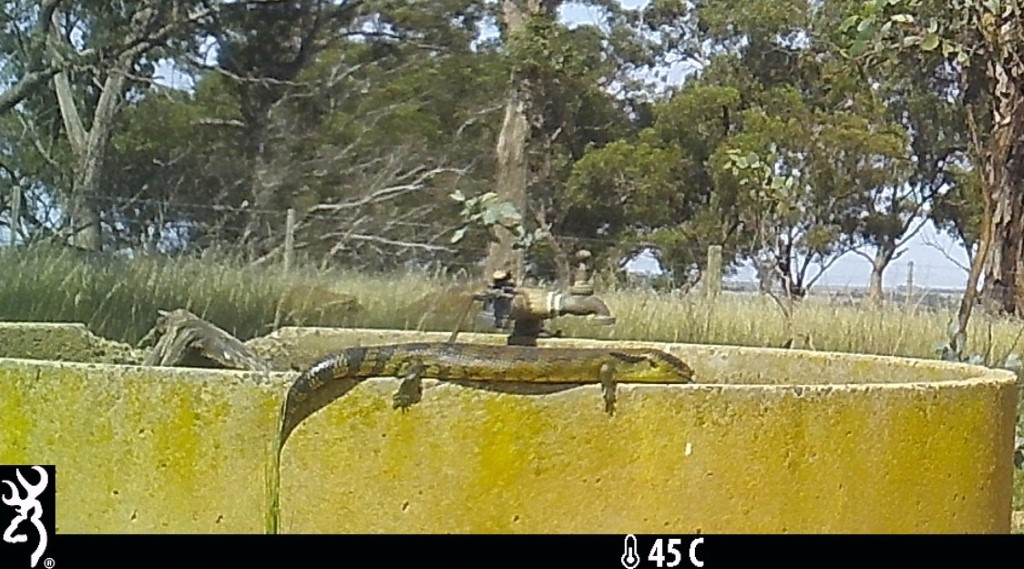 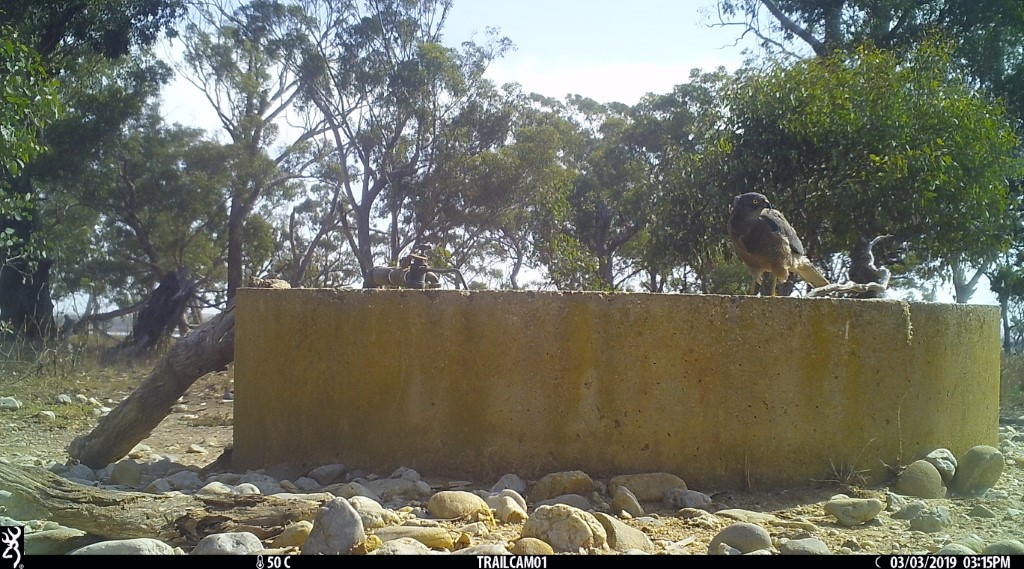 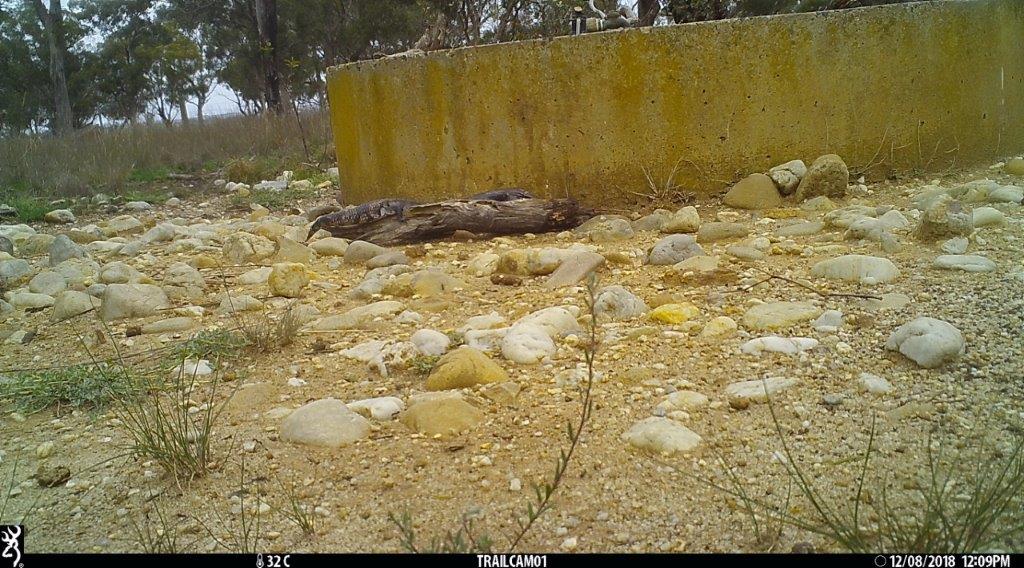 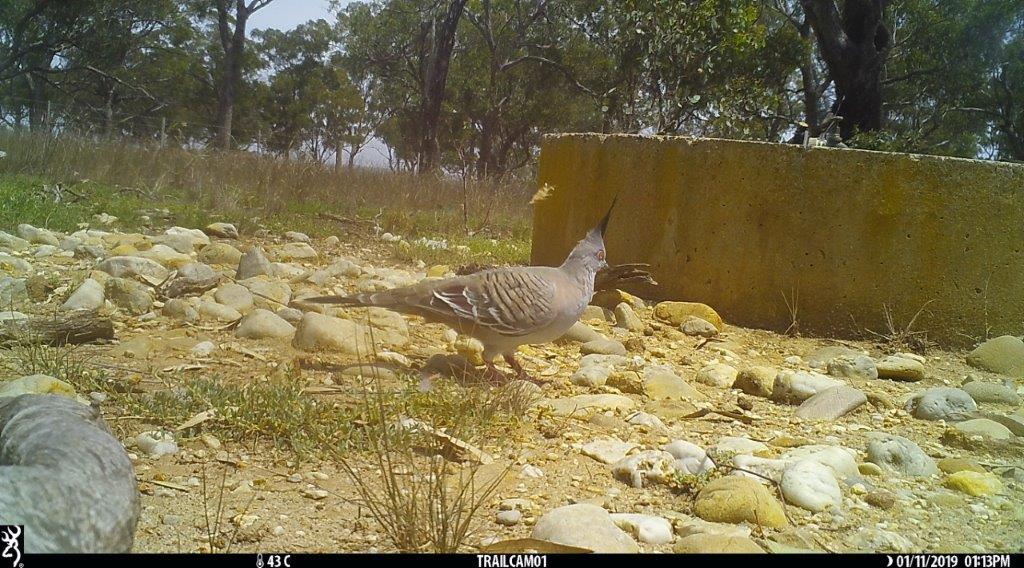 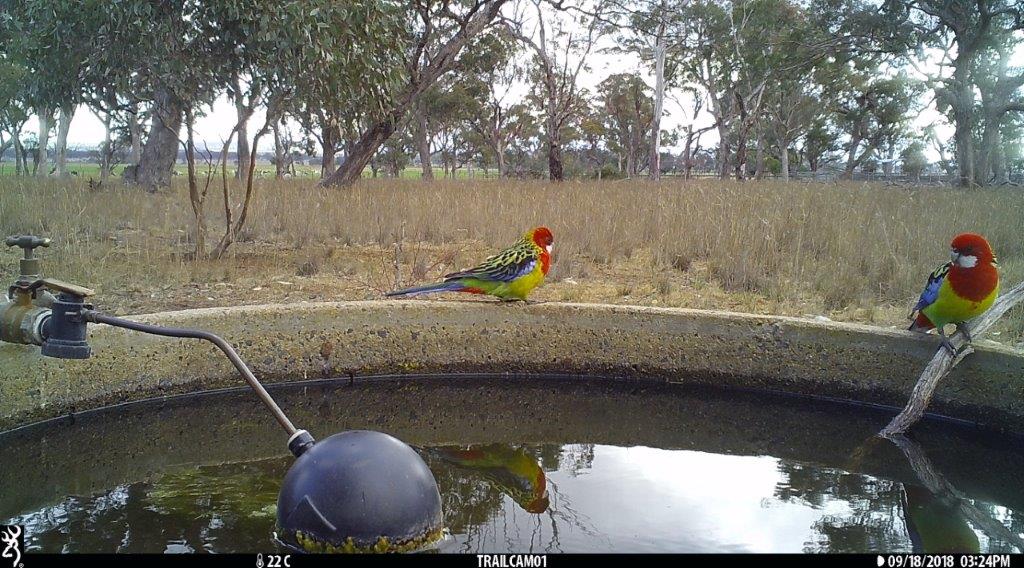 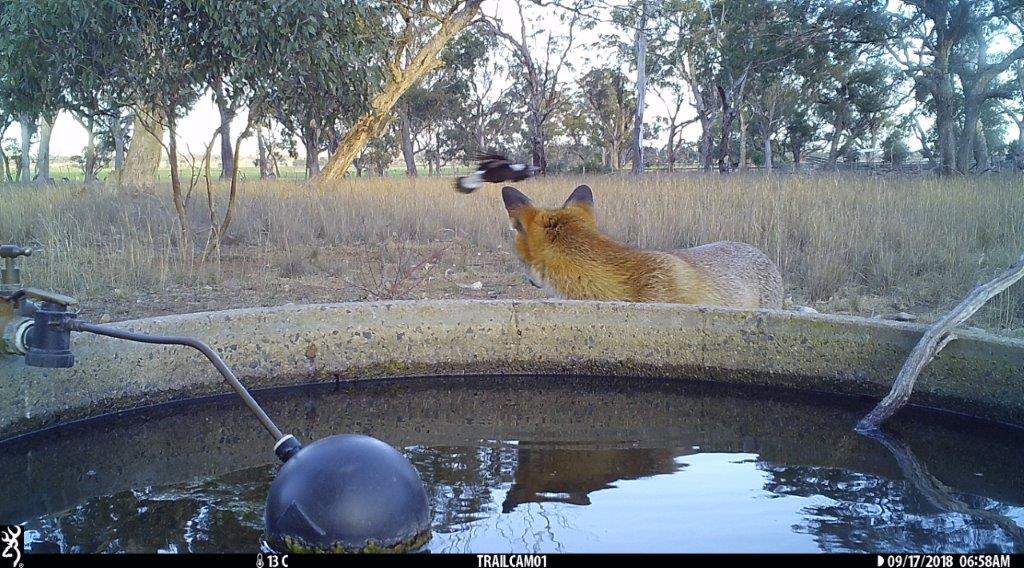 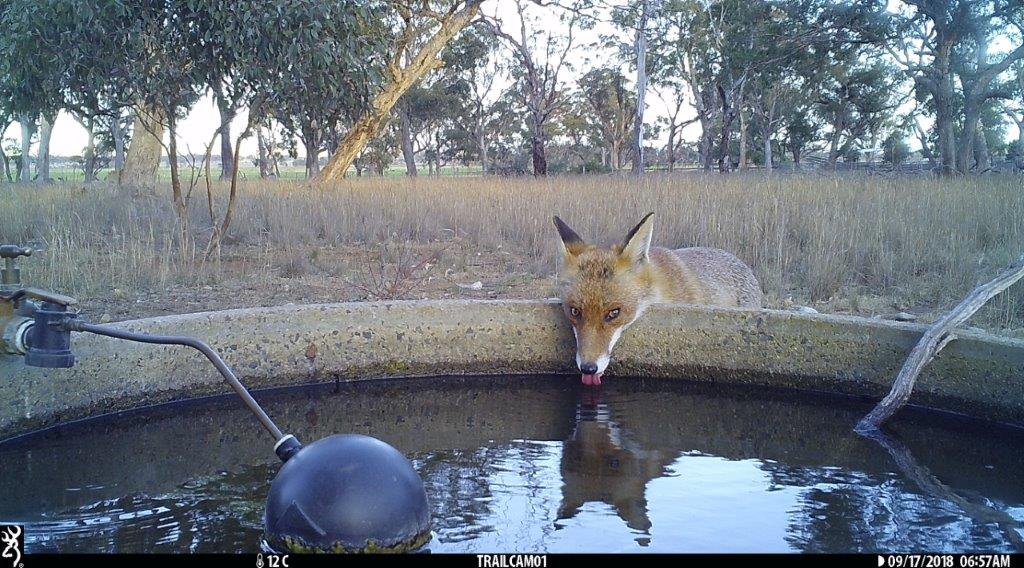 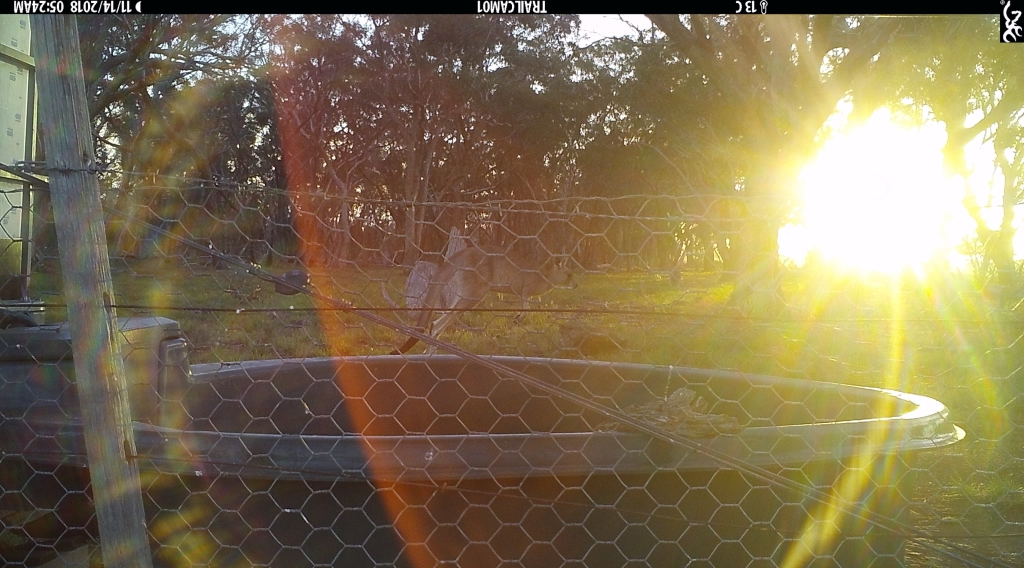 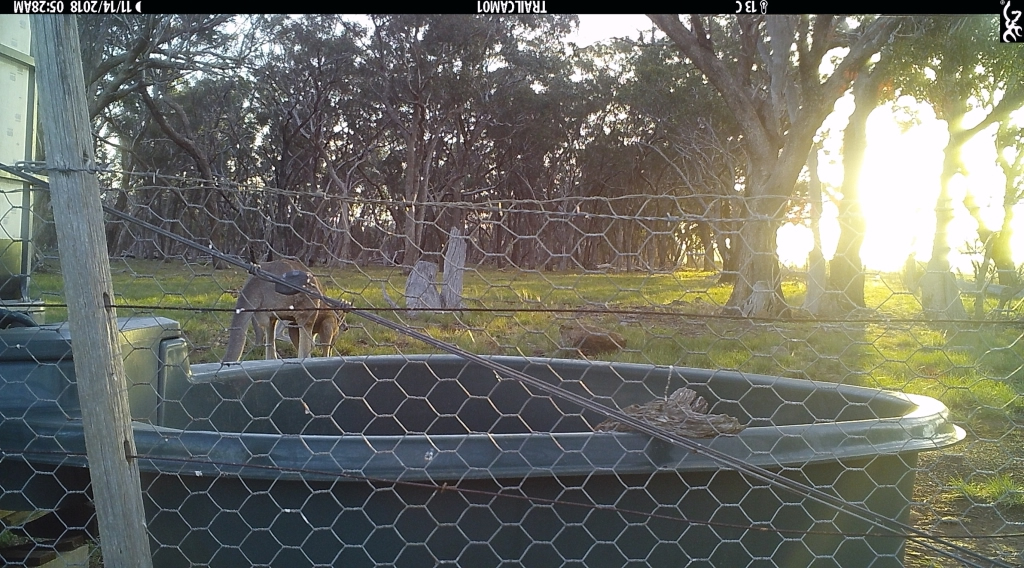 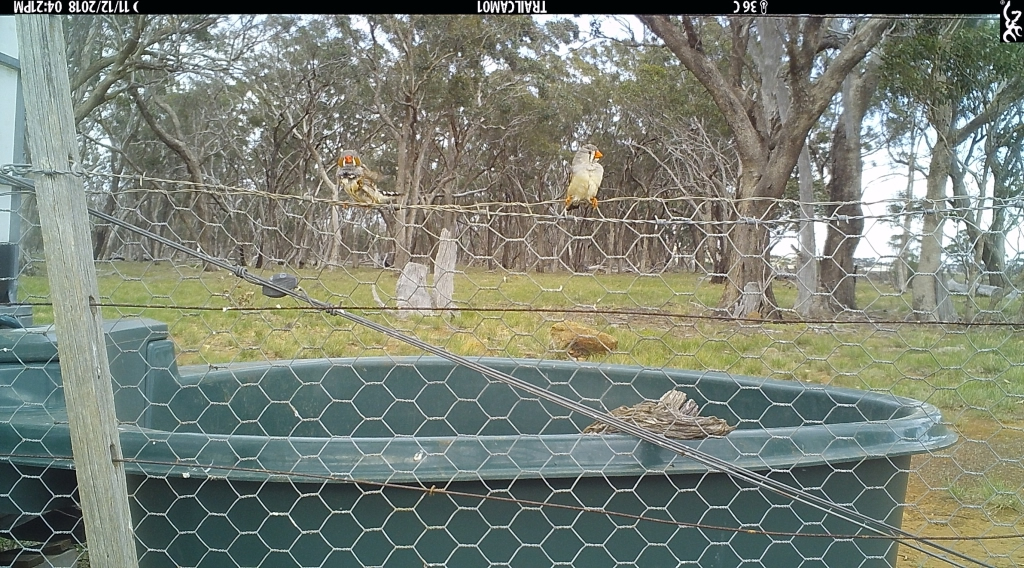 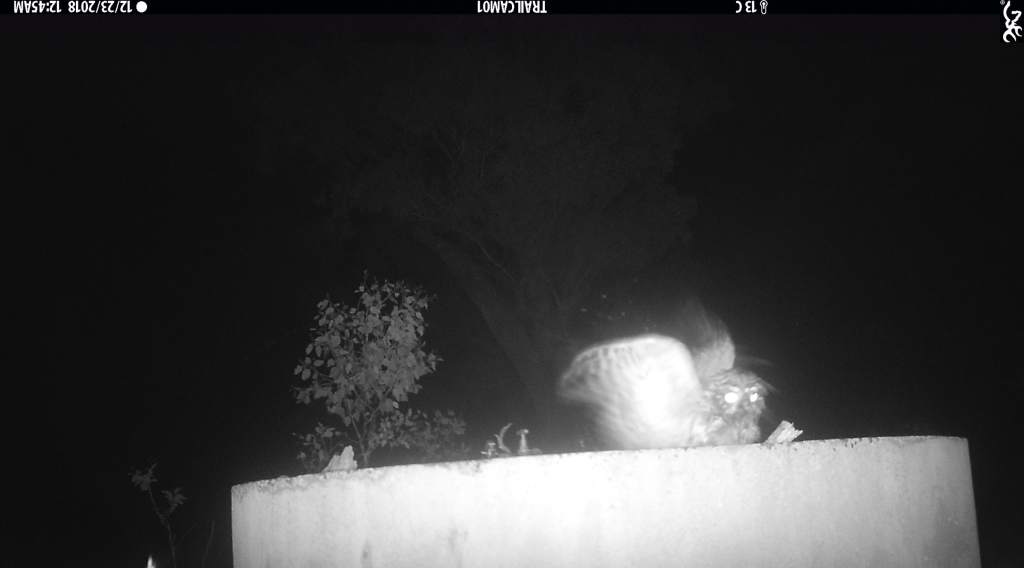 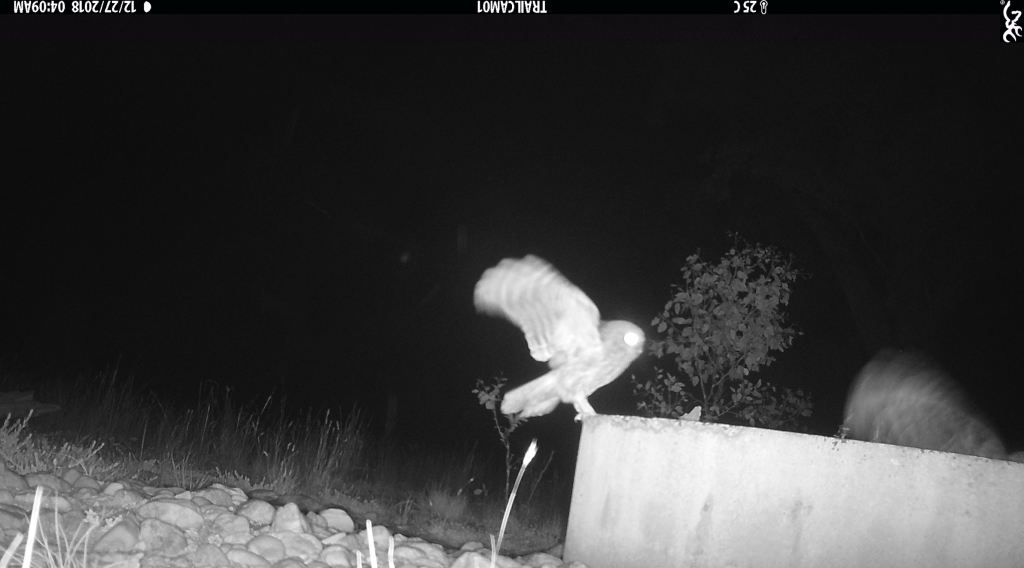 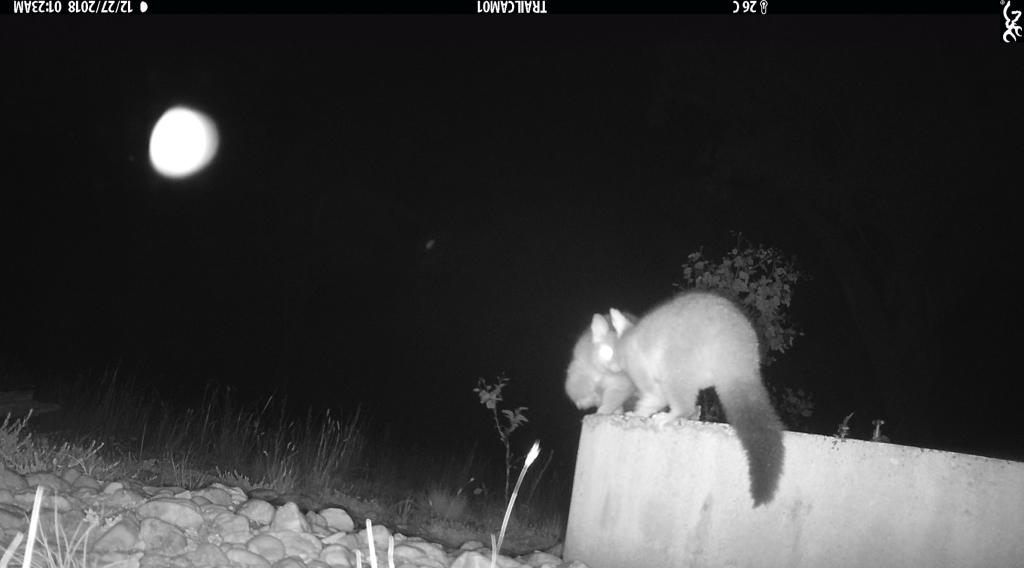