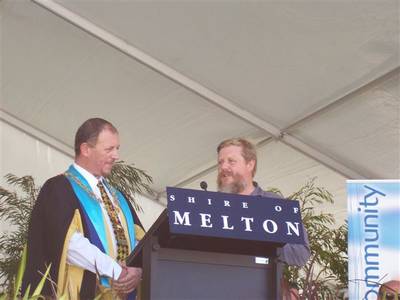 PLEG's Secretary, Daryl Akers, was the recipient of a Melton Shire Community Achievement Awards 2008 (Achiever Award 25 - 69) on Saturday 26th January. This award recognises the outstanding achievements and contributions of local groups and residents in Melton Shire.

It is a recognition of his untiring and freely given time in facilitating a range of local environment actions, at a personal level and as Secretary of Pinkerton Landcare and Environment Group and President of Melton Environment Group.He is also very active in Melbourne Water's Water Watch program.

Melton Shire Mayor Cr Justin Mammarella congratulated the award winners who were judged by an independent panel and had their awards presented at the Australia Day 2008 celebrations on 26 January at the Willows Historical Park in Reserve Road, Melton.
"Congratulations to our winners, who are inspiring examples of the great work being done in our community and give us all a reason to feel proud," said Cr Mammarella.
"It's fantastic to see such a range of people of different ages and backgrounds carrying out positive work in diverse areas of our community, from activities to benefit both our youth and senior communities through to action to benefit our local environment.

Daryl has excellent field naturalist skills and is often referred to by other environment groups such as Friends of Toolern Creek for identification of frogs, snakes, birds and plants.

Daryl Akers has been part of the Melton Environment Group for six years and has been president for the past three years.
Daryl produces the monthly group newsletter, featuring his observations on the flora and fauna of Melton at creeks, reserves and parks.
These observations are made by Daryl on his regular walks and drives around Melton noting the birds, plants, frogs and animals around the creeks, environmental reserves and parks. 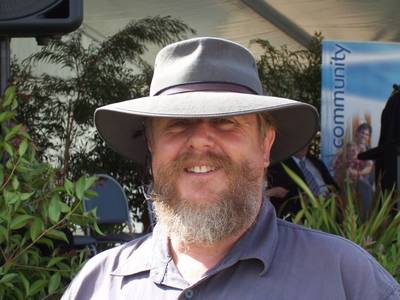 Under Daryl's leadership, the group has been engaged in several projects including:

Melton Environment Group has also taken on Frog watch for the first time this year and Daryl has lead several "frog forays" often in cold and bleak conditions.

In 2006 Daryl became secretary of Pinkerton Landcare and Environment Group (PLEG) he has: