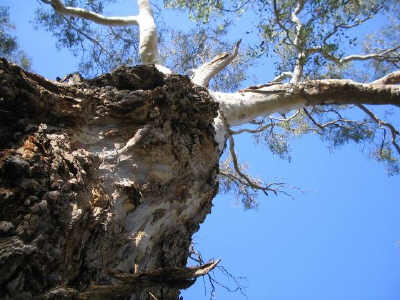 The two language groups of aboriginal people who shared the Werribee River as their common boundary, were the Woiwurung and Wathaurung.   The Woiwurung were composed of several clans including the Kurung-jung-balluk who were located in the area between the Werribee River and Kororoit Creek.
“The clan name means “red ground people” and perhaps refers to the red soil of the basalt country still evident in some areas” (Hilary du Cros and Phillipa Watt, Skeleton Creek Catchment - Aboriginal Heritage Study 1993)
The Aboriginal people who occupied the western side of the Werribee River down to Geelong were of the Mapeang-balluk clan of the Wathaurung language group.  There appears to be have been a clear cultural distinction between the inland inhabitants such as the Woiwurung and the coastal people, the Bunerong. Culturally this distinction is expressed in terms of clans or ‘moiety’ which were designated as either ‘bunjil’ (eaglehawk) of ‘waa’ (crow). The ... Kurung-jung-balluk was of the ‘waa’ moiety while the people to the north and those west of the Werribee River were ‘bunjil’. (Barwick 1984) 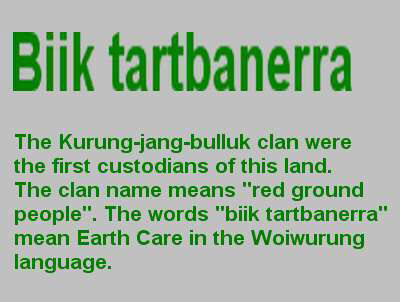 Corroborees were held close to settlements at Melton and Bacchus Marsh in the 1840 -50’s. Groups of Aborigines were also known to have camped at Cobbledicks Ford (du Cros 1989a.28)

“Aboriginal people relied on a wide range of plant and animal foods, some of which were eaten regularly as staple foods. The types of resources available near the creek and associated swamps would have included fish, water birds, frogs, reptiles and small mammals. The Common Bull Reed, Bull rush and club Rush which provided edible leaves and rhizomes (Gott 1982). The club Reed was an important item. It is reported that in some areas on the plains it grew so abundantly “around marshes and billabongs that it resembled wheat (Gott in O’Neil 1993 11)”. The murnong or yam daisy (Microseris scapigera) was a fructan-rich tuber gathered as a staple food by Aborigine women in the study area (du Cros 1989a, Gott 1993). 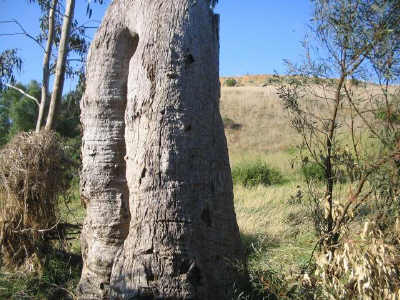 Gum, resin, bark and heart-wood were exploited by aboriginal people for the production of artifacts. Possum skin cloaks were used as a type of warm clothing (Presland 1983, du cros 1988). Stone artifacts were either selected from creek pebbles or quarried from suitable outcrops that occurred outside the study area.” 2.3.1 Exploitation of Resources and Movement Patterns from (Hilary du Cros and Phillipa Watt, Skeleton Creek Catchment - Aboriginal Heritage Study 1993)

The Western Region has had a particularly violent contact history. This was worst in the first ‘official’ year of settlement in 1836, although settlers were welcomed by Aboriginal people while they thought their presence was temporary. The impact of grazing by European stock caused a destruction of aboriginal food sources both by the herb and root plants being eaten out and from competition with kangaroo and wallaby. Retaliation by white settlers against Aborigines helping themselves to their sheep was brutal and a cycle of murders continued through the first decades of white settlement. (Cannon 1982 a & b, Barwick 1984, Presland 1983)

“After a space of a few years, many groups were starving and forced to rely on scanty government provisions administered by the Aboriginal Protector for the area or local settlers hand outs.

Eventually in 1840 the Pinkertons settled on Kororoit Creek. The plains were then covered with luxuriant herbage and waving purplish-brown kangaroo grass, 4 ft. high, was as thick as a crop of oats. Although the Werribee tribe of blacks was numerous (they came in hundreds at times) they molested no one at this station. Once the brass plate of the sundial was taken. Explanation was made to “King Benbow” that it must be immediately returned; the missing article was soon found. Occasionally Mr. Pinkerton cooked a large boiler of rice for the natives, who were all lined up with each a piece of bark to get a ladle full.”

Other settlers did not treat the aborigines so well.

During the 1992 archaeological survey scar trees were found in the Pinkerton woodland, the bark was removed by Aboriginal people for use as containers or shields. Another grey-box tree has footholds cut into the trunk, which may have been used for gathering of honey or as a lookout.

Artifact scatters were located on the edge of the basalt plain above the river escarpment, and another scatter was found on the flood plain.